Alex and his sword

We're trying to teach WIlliam to sleep on the lower bunk bed since number 3 is almost here. It works out anyway since he can climb out of his crib anyway. But, he usually rolls out of bed between 3 and 4 am. Then I go rock him and put him in his crib to finish the night. I really have every intention of getting a bed-rail thing that keeps him from falling out. But, last night when I was rocking William, the pregnant belly starting punching William with a vengence. Apparantly number 3 didn't like being woken up and squished. I hadn't really noticed because he's the busiest little bundle of pregnant belly I've had yet and I'm used to it. But last night, William got tired of it and suddenly sat up and glared at my stomach. I totally had to laugh. Sibling rivalry or something like that starts young.

We were running errands yesterday and we were near our old neighborhood, so I told the kids we were going to stop by and see a friend and see if she was home. It turned out she wasn't, so we went sploring as Abby said it. We looked at the new houses that were up, and looked around the neighborhood and then I was done, but she wanted to do more sploring. So we went up and down every little side street getting out of the neighborhood. Finally, from the back I hear, ok mommy, when I say 'let's get out of here, then we need to go to the store.' Ok. So another street or two and she was having so much fun until she pointed one way and said it was time to get to the store soon. I told her the store was the other way and she was convinced we were lost. So, then the magic words came, "Ok mommy, let's get out of here." OK. So, I started towards the store and she was still lost and told me I was going the wrong way. Who's driving anyway. I told her no, and started pointing out landmarks we see on a weekly basis, and then she felt better.

William has learned to unzip his pajama's. He doesn't know how to zip them up though. He unzips to his waist and then runs around like that. It reminds me of those men who have a button or two undone, and there's chest hair peeking out.Then to top it off, he likes to put toys in and out of the pajamas which always get stuck in his feet and he has to dig them out. The other night he dropped a globe from Abby's doll house in and was searching for it. James laughing started singing, "He's got the whole world in his pants, he's got the whole wide world, in his pants..." Oh the funnies when trying to get ready for bed.

I love how kids keep you hopping (most of the time). Sometimes I will take a shower while William is sleeping and Abby is watching cartoon or playing on the computer. Today she knocked and asked if she could shower too. Who is going to turn that down? I had an opportunity when I didn't have to fight her to take a bath. I said yes. So she hopped in, I finished shaving and got her cleaned up. While I'm turned around,

Abby pops up and says, "Mom, you have a big botttom!"

Thinking to myself, Thanks a lot!. Out loud, "I know honey, I hope it disappears when the baby is born."

Then I turn around and almost smack her with my pregnant belly.

Thinking to myself, Ya think! Out loud "I know honey, that should disappear when the baby is born too."

I hop out of the tub to go get dressed while Abby finishes soaking in the shower. From my room I can hear...

In a child that would be a few years older, they would be teasing me. But she was just singing in the shower. I'm not sure how I feel about that. I hope she doesn't bring it up again. And on second thought, I think I'll make sure to shower on my own for awhile. It might be worth the fight to clean her up later. :D

Abby has just turned 4, and it's amazing the difference in attitude between 3 and 4. Most of the temper tantrums have ceased and I can explain things to her and she helps me all the time. But, every once in awhile we have a day where I swear she's reverted back. The last two days have been major temper tantrum days. Due mostly to her little brother who turns on the light at night and keeps her up. She needs a lot more sleep at night than he does and she hasn't been getting it. It shows. Which reminded me of my favorite temper tantrum about 5 weeks ago. She was out playing with the neighbors and I warned her that she had about 15 minutes before we had to go change for dance. It's been cooler with the fall weather and the kids weren't used to the change yet. They all wanted to set up the slip-n-slide. I told her she could, but that she didn't have time to change into her swimsuit. I told her to just get her clothes wet and then we would change into dance clothes. Well, that didn't fly apparantly. She asked 2-3 more times to change and I kept saying no, not only because of the time restraint but because William was taking a nap in that room, and he had been out of control. Finally, while I'm talking to a the neighbor kids mommy, Abby disappeared. I noticed after a few minutes and yelled for her and she didn't appear. I yelled again, no show. So I went to investigate. To my surprise (I know, you all aren't surprised) she was butt-naked and hiding behind a playhouse so I couldn't see her. I asked her to put her clothes on and go inside. It was time to change anyway. But it was two major blows. She didn't want her clothes on and she didn't want to go inside. She lost it, big time. So, I started to put her clothes on for her. I managed to get her underwear most of the way up, but I couldn't bend all the way down to her, and she was hysterical. She suddenly jumped up and started running (there's no way I was even going to try to catch her at 6 months pregnant).  But the funniest part was that Abby never stopped to finish pulling up her underwear. She just made a mad naked dash around the house. I was laughing so hard I just let her run, I figured she would come back. And she did emerge on the other side of the house and had somehow magically managed to pull her underwear all the way up. So, I don't know how much of the neighborhood she flashed before she ended up on the swingset, still hysterical. But, it took me a few minutes to stop laughing so that I could finish disciplining. Hence the name, the naked bum run. Must have felt nice in that nice cool fall air!

Ok, there is one more thing for the day. I mentioned that I only have 6-7 weeks left of pregnancy and we can't decide what to name this kid. There are names we like, but nothing that is like za-zing. So, we're taking a poll. Here are the names we like, please tell us which ones you like and what order we should use them. There are no guarantee that we will use any given suggestion, but it would be fun to have some feedback. The only name that I feel like I should preface is Zethan. We found it in the Old Testament, he's one of Benjamin's grandsons and we like that it is different and similar from Ethan, but we're not sure about it as a first name.

Or, If you have any other recommendations, we're taking suggestions.  Thanks Everyone!!!!!

So, I spent part of August, and all of September and October canning. That is where I disappeared to. I didn't clean house, I didn't cook, I just took care of kids (kinda) and did a ton of canning. We have Apricot Pie filling, whole tomatoes, diced tomatoes, pears, peaches, apple pie filling, a TON of jelly and jam, a Ton of Applesause, and salsa. I made it that whole time without fruit flies. It was amazing and I was counting myself lucky until the very last week of October. Every day since then there are 4-6 flies around my house and they are driving me crazy!!! Mostly because every single day I kill 4-6 and the very next day there are 4-6 more. So I came up with a hypothesis. I think they are X-Flies. Just like certain X-Men who have regenerating powers, I'm totally convinced that these little stinkers can survive any kind of death and come back to haunt me. I'm going to find their weakness, one of these days.

In other news, here are the rest of the pregnancy pics that a few have requested. 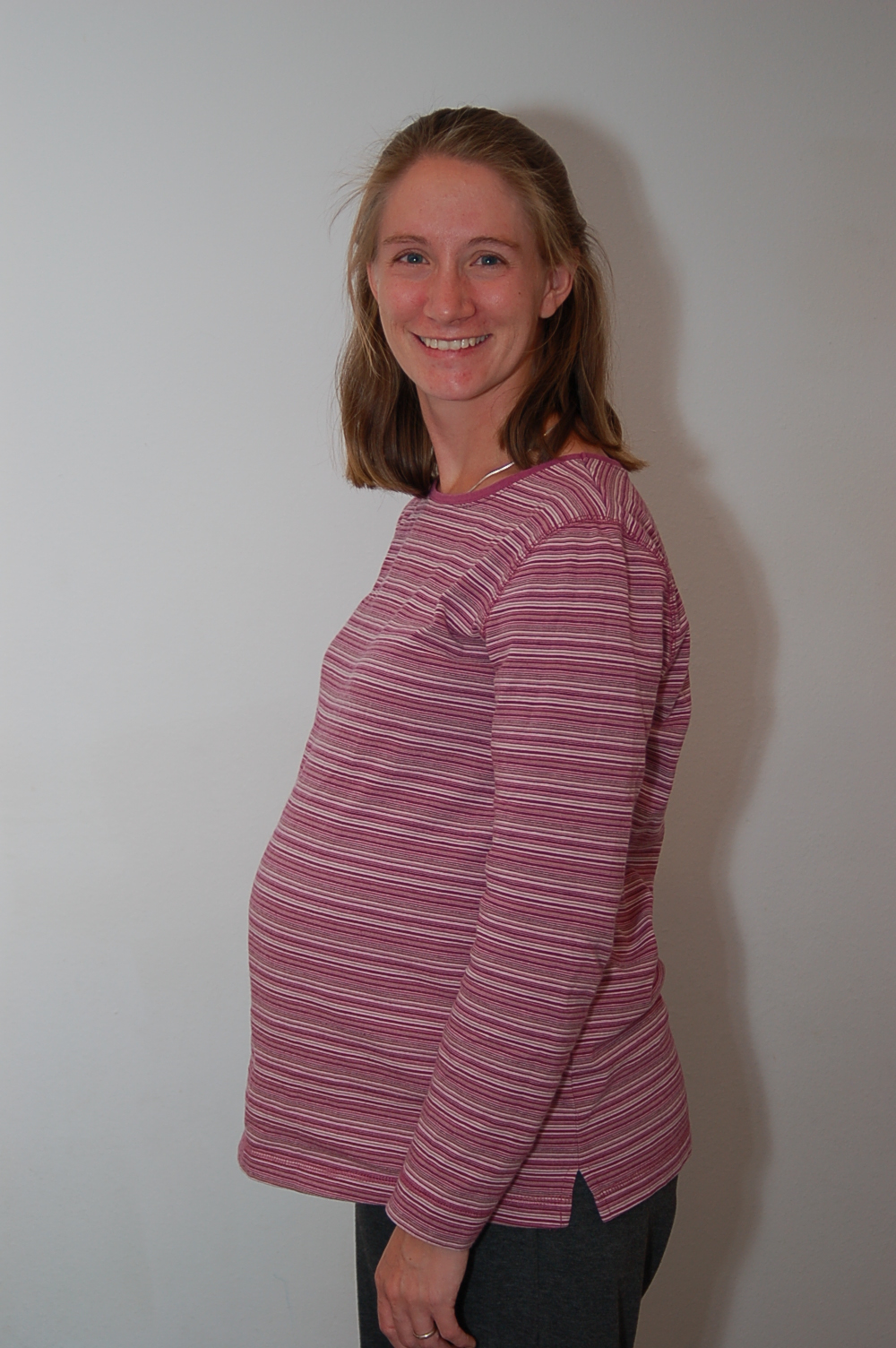 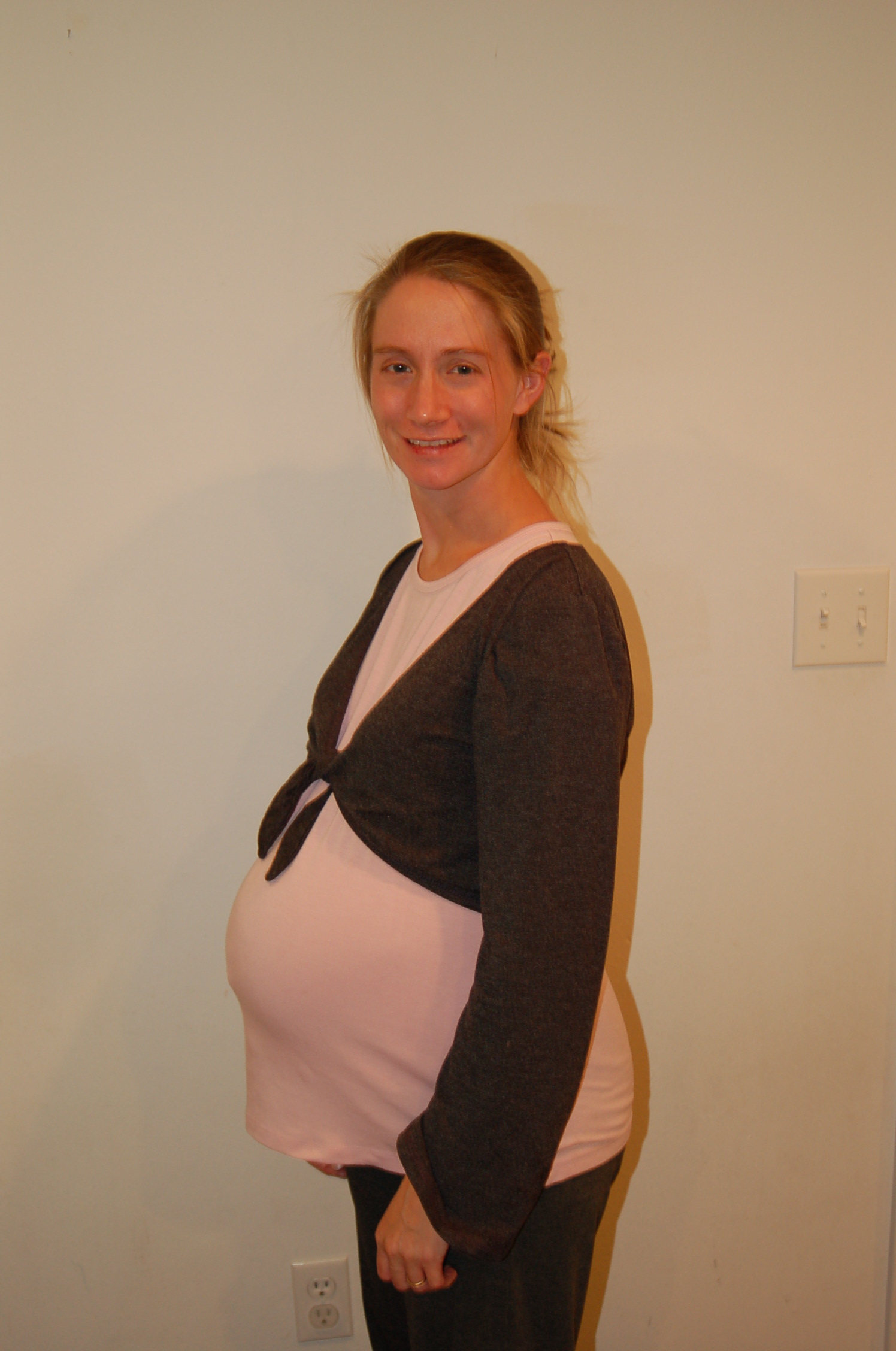 Ok, starting to feel crappy. Can anyone tell? This is desperate mommy at the end of the day with no makeup. This is a good day because I got a shower and I got dressed. I think church is the only place I wear makeup at this point. I just don't care. I want to sleep.  This is 7 months and I feel like a freight liner. Now I'm down to 6-7 weeks or so. I can't wait for this to end. I'd rather be sleep deprived with a newborn everytime. At least I can breathe and bend over. Although, I do have to admit it's cool to feel the baby move.

I usually make something for each kid. This little boy is getting my first attempt at a quilt. This is the top, though my mom picked up the finished product from the quilters last week and says it is amazing. So, when I get it back I'll post that pic, but for now, here is the topper. Alright, I think I got most of my thoughts out. It's time to sleep.